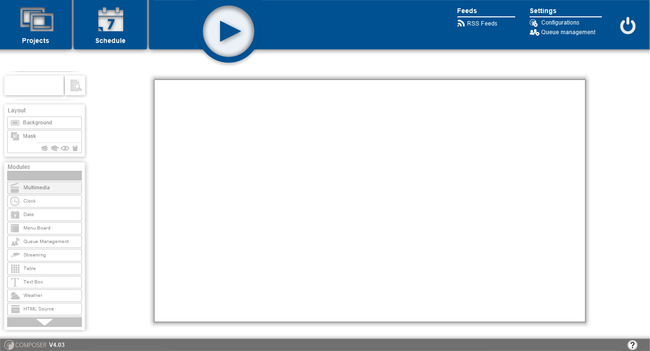 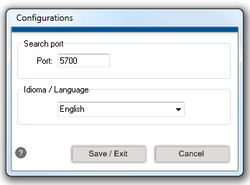 Usually the Composer has the optimal configuration by default. The only thing you may wish to change is the language.

There are some default RSS Feeds preconfigured like news from BBC, CNN and others. For a more in-depth configuration of your feeds, please refer to RSS Feeds. 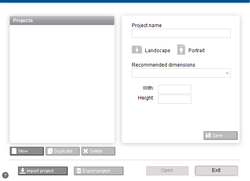 On the top left corner of the Composer application there is a button called "Projects". Clicking there will bring you to the project management window. Here you have two sections. On the left, a list of all projects you already created as well as buttons to create a new project, duplicate an existing one or delete. On the right are the selected project details.

To create a new project click New, define a title, screen orientation (landscape or portrait) and resolution and Save. For optimal visualization, the project's screen resolution should be the same as the screen that is going to play the project. 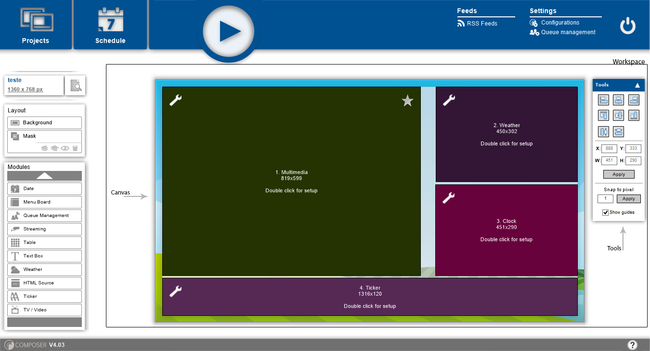 Composer main window with a project

The top bar is for general purpose operations such as managing Projects, Schedules and Queues, configurations and deploying projects. 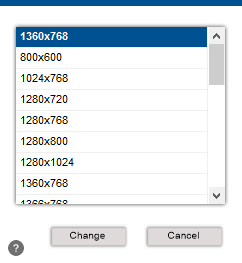 Displays the name of the project and the resolution being used, as well as allowing it to be changed. The right button allows for a preview of the project at its current state.

The side bar is dedicated to the project being created. It's composed of 3 parts.

The first consists of information about the current project and a button to preview the work done so far.

The second configures the layout. The layout is composed by a Background and, optionally, a Mask.

The third is a list of modules that can be added to the project. There are multiple modules for multiple purposes, please refer to Modules to learn more about each one.

The workspace consists in 2 parts, the Canvas and the Tools bar.

This is where the modules are added, configured and arranged. The resultant layout is what the player will show with each module running.

With this tools, align modules is much easier. Here you could align each module in relation to another. With "X, Y, W, H" text boxes, each module could be positioned and resized to the exact values of "X", "Y", "Width" and "Height".

In this toolbar it's possible to enable "Snap to pixel" and "Show guides" options, as well as set how many pixels you want to move each module.

After creating a Project, it must be sent to a Player. This button will do just that. Note that the player(s) must be running to be able to send projects. The mechanism for sending projects and schedules varies depending on whether you are using Local Composer (the Composer on the same player), Network Composer or E-Composer. 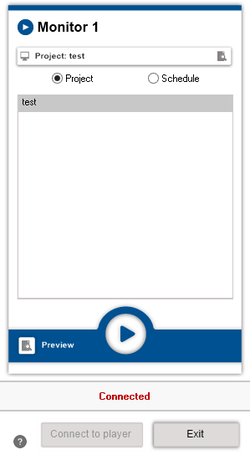 Simply select the project (or schedule) you want to send to the local player. Note that the project currently open will be selected when the window is opened. The player (if minimised) will open.

Network Composer can be used to send projects to one or more players inside a network. It's possible to search players to automatically detect players inside the network and add them to the player's list. If the player can't be found for some reason, the Add player button can be used to manually insert the player by its IP address. You must also know the username and password of the player, which can be defined in its configurations.

In the player's list the following options are available:

Connect
To be able to send projects to a player, it needs to be connected (green circle)
Information
Displays information about the selected player
Screenshot
Takes a screenshot of what's currently running on the player and displays it
Settings
Configures the connection to the player. Auto check for IP changes allows for, when a player gets its IP from a DHCP server, to automatically update the IP.
Download project
Downloads the current project, or projects, running on the player

In E-Composer you don't send projects to players. Instead you send it to the Content Manager. It's also possible to fetch existing projects from the server to the local composer provided you have the needed permissions.

E-Composer is integrated with Content Manager's Publishing System, so you can send a project to the server and publish it at the same time.